The summer of 2021 continues to to be warmer than usual, although it does not appear to have effected the health of the cutthroat population in Bee Creek or the creek temperature.

Site one just north of Pendray House and closest to the mouth of the creek, allowed us to retrieve 11 trout ranging from 80 to 140 mms, with the rest of the 26 trout recorded this month spread throughout the sites.

Of special interest is the new site, just west of the stone bridge which was chosen by Jordyn last month. A logged seven month old juvenile trout suggest that spawning occurred in January, 2021. Bree’s site, also new, showed a four year old trout and is located mid way along the creek.

The stone bridge shown here will be removed next month, to facilitate traffic to phase 4 of the Pacific Landing.

The Bee Creek team plans to postpone cutthroat monitoring during August and will continue at the end of September. In lieu of a trout monitoring post in August, there will be an explanation of how the creek will be managed during the building of a new bridge.

With the summer season well under way by the end of June, we continue to see this year’s cutthroat growing quickly. By now the largest trout have a fork length of 140 mms and look like they have been eating lots of freshwater shrimp.

Freshwater shrimp in Bee Creek eat mostly algae, bacteria, decaying plant matter. The gee traps collect the shrimp overnight along with the cutthroat, and are return when the trout are released.

Two species of shrimp are found in BC lakes and streams.

“Gammarus are the most widely distributed and easily recognized, as they can reach body lengths in excess of 15 millimetres (about 3/5 inch). They are found in a variety of colours, with light to dark olive the most common. Hyalella are much smaller shrimp that rarely exceed four millimetres (less than 1/5 inch) in length and are typically much lighter in colour, with a pale olive-green to light grey predominant”. (gofishbc.com)

With the abundance of shrimp in Bee Creek, we found that some trout, certainly not all, had eaten well. Notice the distended stomach of this healthy cutthroat.

We retrieved 19 cutthroat in June with fork lengths ranging from 70 to 145 mms, or 3 to nearly 6 months old. The creek temperatures have warmed slightly, and consistent through all sites at around 13.5 degrees.

This month Jordyn and Bree each chose a new site on the creek. Site selection was based on 1: shade, to protect the trout from sun and preditors, 2: current, with a current speed not too strong that a 24 hour soak would not be too exhausting and 3: depth, to ensure the trap was submerged at a level that did not endanger the fish.

Both new sites produced three cutthroat each, confirming that the trout have dispersed well throughout the creek.

May 29th marked the sunny opening of the trout monitoring season on Bee Creek. Daryl and I were joined by ELSI volunteer Jordyn, for her third year working on the creek and Bree, who is studying Environmental Sciences at Comosun College, joined us for the first time.

The creek had a healthy clear flow, with a consistent 11 degrees and we were all pleased with a strong count of 24 sea run cutthroat.

Unlike the past four years the trout had dispersed evenly after the spawning in the spring, to throughout the creek from the mouth up to site six on Royal Roads University property. Trout ranged from 75mm to the largest juvenile of 145 millimeters. The trout are estimated to be between three and six months old, so spawning probably occurred as early as December 2020 up to March 2021.

The end of the trout monitoring season showed some good numbers of Cutthroat in Bee Creek, plus a healthy 50 mm Coho Salmon fry. In warm sunny weather we were joined by Nicole, our new ELSI volunteer and she learned how set traps, measure water temperature, measure fork length and record the data. She learned a lot in a few hours.

The Coho fry was its third stage of its life cycle, coming after eggs and alevins. Although they are always found in Colwood Creek just north of us, it is rare to see one in Bee Creek.

With winter arriving, the annual summary of findings will begin, but based on initial results 2020 appears to have shown that creek is remaining healthy and that the cutthroat numbers are staying consistent.

September brought healthy numbers of cutthroat in Bee Creek. The trout ranged from 65 to 130 millimeters and with the exception of site 2, which held a small sculpin, we were able to retrieve trout from all sites.

Jean joined us for the trap retrieval and did a great job with Daryl measuring a record 30 cutthroat. With the season coming to a close next month it looks like the monitoring season will be successful this year.

Sculpins are interesting fish. A sculpin is a type of fish that belongs to the superfamily Cottoidea in the order Scorpaeniformes. As of 2006, this superfamily contains 11 families, 149 genera, and 756 species. Sculpins occur in many types of habitat, including ocean and freshwater zones.(Wikipedia, 2020)

With summer end brings cooler weather and healthy cutthroat numbers in Bee Creek. We retrieved 20 trout today with fork lengths ranging from 70 to 120 millimeters…a mid range fork length as opposed to last year, when we saw 40 to 180 lengths.

Best numbers appeared in site 1 and 5 with few trout in between, so this month they seem to have spread out upstream to Royal Roads property or have remained closer to the mouth of the creek. Trout colours look good and the creek recorded temperatures of around 11 degrees.

Overall, the creek looks to be healthy with trout numbers similar to last year.

We were happy to see Jordyn and Jean come and join us, since the weather was fine and the trout numbers have improved.

The warm weather has changed our trout count and we can see some healthy numbers of Cutthroat especially close to the mouth of Bee Creek.
Water temperatures are rising gradually and the creek is getting heavily covered at site 1 with weed, horse tail and other shrubs. Each site produced trout and we measured 28 in all.

Site 5 which is a pool just north of the bridge, produced five trout including one which had died. It is uncertain if the trout died then floated into the trap, or died after swimming into the Gee trap, but it looked as if it had been dead for some time. A photo of the trout, which had hardly any colour was sent to our colleague at Royal Roads for comment.

The trout seemed overall healthy, with good colour and very active while being measured.

June brought one new site to explore on Bee Creek. Just north of the bridge at Pacific Landing, this site is located just under a large log, to provide shade and just out of the main flow of water. The pool also has good depth. We recovered only one trout here, but like the site as it is just south of the Royal Roads site.
We were joined by Jean, our new ELSI volunteer who measured the water temperature and was taught by Daryl how to measure the trout. Jean is pictured here at site 1 with Rod and Daryl, where we retrieved four Cutthroat.

On May 31st, we began our third season of monitoring Cutthroat on Bee Creek. Site one was quite active, much like last year and we were happy to see the trout back in the creek. With sizes ranging from 90 to 110 mm, it looks like last years trout were still close to the creek mouth.

Further upstream a few similarly sized trout were observed and recorded. A total of eight trout is a quiet start to the season. June will likely see an increase in activity in the creek

Rod is pictured here by the stone bridge which which crosses the creek and will be widened this year.

The end of our Cutthroat monitoring season with Amy, Jordyn, Rod, Daryl and myself was great fun. We have now established five productive sites where we can expect to document a consistent trout count. 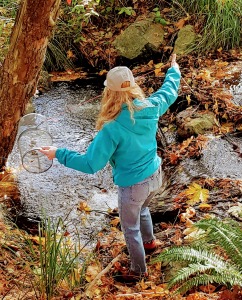 One of the new sites is hidden inside the riparian zone and provides a pool just under where the creek flows over well placed logs. Here Jordyn lands the gee trap directly into the pool where four trout were found.

The second is a very small pool just above where the creek falls over logs and is deep enough to hide trout. The trap needed to be hidden under the bank overhang. Daryl found a healthy 95 mm trout there.

After placing traps, we decided to try another new site just below the bridge. The small quite shallow pool produced four Cutthroat

On retrieving the traps on October 27th, the range of fork lengths provided food for thought. The smallest Cutthroat retrieved measured 45 millimeters, suggesting that the trout for this year, have spawned well up in Bee Creek.

This Cutthroat, with a fork length of about 170 mms was very healthy, well fed, with great colour. It was retrieved from site 5, approaching the creek source in Royal Roads property. Freshwater shrimp are active here which may explain a consistent trout count.

The smallest trout measured about 50 millimeters and was retrieved just below the bridge where we tried a new site. Fortunately we found three Cutthroat here. This one appears to be a year one juvenile cutthroat.